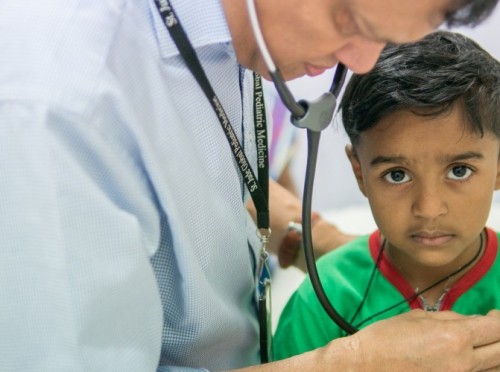 Work led by Professor Vaskar Saha, a paediatrician from The University of Manchester, means that around 80% of children with the most common childhood cancer are now likely to survive following treatment at major centres across India, thanks to his revolutionary approach.

Originally from West Bengal, Professor Saha – who splits his time between The University of Manchester and Tata Medical Centre – previously led research which helped increase survival rates among children with the condition by 10% in the United Kingdom.

Survival rates of most cancers in India are usually 15-25% lower than the United Kingdom. However, with Professor Saha’s work challenging the stereotype that cancer cure is a prerogative of affluent nations, his research has increased survival rates in Kolkata from 65% in 2014 to 80% in 2019.

“Not so long ago, four in ten Indian children would die because of poor treatment and relapse. The former was mainly due to the absence of standardisation in testing and treatment.

“If we can improve outcomes in India by 10%, then an additional 1,500 children a year grow up to lead normal lives.”

Transferring his knowledge to help raise standards of care in the developing world, Professor Saha is facilitating other self-sustaining centres in Delhi, Mumbai, Chennai and Chandigarh.

Vaskar continued: “With the help of colleagues in the NHS and across the world, we’ve successfully integrated modern diagnostics and monitoring into routine cancer care. This not only saves lives, it also saves money.

“Children who don’t require intensive treatment are identified early and we are using IT tools to monitor and manage patients so they can return home early.”

Dr Mammen Chandy, Director, Tata Medical Centre, Kolkata, said: “We are currently researching appropriate therapy through the ICICLE project which is being led by Professor Vaskar Saha. The aim of the project is to collaborate with specialists internationally known for their expertise, who can bring their skills and laboratories to India for the benefit of the Indian population.

Before the ICICLE project launched, excellent medical centres across India were common and most children with acute lymphoblastic leukaemia were able to get the drugs they needed.

Historically, hospitals in India often work in isolation without exposure to the international research community. Travel costs to faraway hospitals were also difficult for poor families or those on low incomes.

Once clinicians started sharing their knowledge and standardised systems were put in place, change began to take root. And the provision of accommodation for families was also crucial.

Vaskar Saha added: “Small things in research can make a big difference such as how and when you administer a patient’s medicine and how you care for them. I wanted us to document this and share it among ourselves. That’s what we do in the NHS which is an amazing role model.

“We knew that while in the west treatment for childhood leukaemia is highly successful, that doesn’t often happen in countries with fewer resources. We wanted to change this.

“The centres across the country treat more than 1000 patients a year and nowadays 700 to 800 of them are saved; probably more as other centres adopt the model.”

Shahid Jameel, PhD, Chief Executive Officer, The Wellcome Trust/Department of Biotechnology India Alliance, added: “Our vision is to support the best biomedical researchers in India not just through funding, but to help develop the next generation of science leaders in the country. We are very pleased to be supporting Professor Saha's work in India through one of our most competitive fellowships.

“By working in partnership with Professor Saha and The University of Manchester, scientists from India will also have the opportunity to train in transformative research environments in India as well as the UK.”