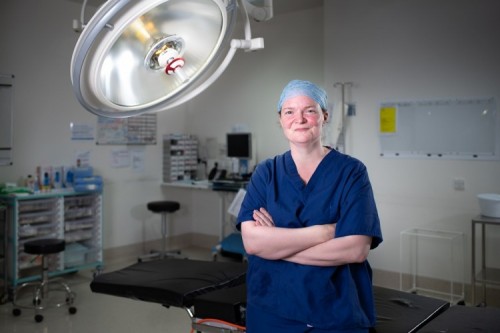 The first UK study to estimate the proportion of womb cancers caused by an inherited cancer predisposition called Lynch syndrome has been carried out by The University of Manchester.

Almost 3% of womb cancers are linked to a hereditary condition named Lynch syndrome, according to new clinical research findings published in the journal, PLOS Medicine. The results of the new study have caused the National Institute for Health and Care Excellence (NICE) to advocate a change in testing practices across the UK.

Knowing that a person has Lynch syndrome can help determine which cancer treatments are likely to be successful. It also means that patients' family members can be screened for the syndrome and those who test positive can be offered bowel-cancer screening to detect and remove pre-cancerous polyps. This has been shown to save lives. Whilst the link between Lynch syndrome and bowel cancer is well established, however, the link with womb cancers is less well studied.

The University of Manchester has now led the first prospective UK study to determine the prevalence of Lynch syndrome in 500 women newly diagnosed with womb cancer and found 16 to have Lynch syndrome.

Thirteen of the women did not know they had Lynch syndrome and their diagnosis prompted genetics referral, cascade testing of family members and access to prevention interventions (like colonoscopy and aspirin chemoprevention) that will hopefully prevent them (and their relatives) developing other cancers in the future.

Professor Crosbie said: “If all women with womb cancer were tested for Lynch syndrome, we would identify around 220 women every year who didn't know they had it, plus on average 3 family members per index case. This is around 1,000 people every year in the UK alone who would be diagnosed with Lynch syndrome and empowered to reduce their future cancer risk through proven interventions.

“More people could be enrolled in cancer prevention and screening programmes, and this may reduce the number of people being diagnosed with cancer, particularly at a young age.

“Because womb cancer often presents first, it may be the first sign that a patient has Lynch syndrome and is therefore at risk of developing bowel cancer and other Lynch-related cancers later in life. Finding out they have Lynch syndrome could enable them to take action to protect themselves and their family members from these cancers.”

A similar proportion of bowel cancers are caused by Lynch syndrome, which has led to guidance from the National Institute for Health and Care Excellence (NICE) that anyone diagnosed with bowel cancer should be tested for the condition.

Cancer is one of The University of Manchester’s research beacons – examples of pioneering discoveries, interdisciplinary collaboration and cross-sector partnerships that are tackling some of the biggest questions facing the planet. #ResearchBeacons