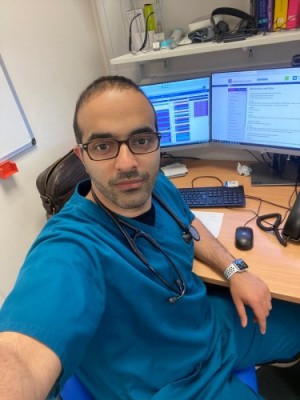 A GP and part-time lecturer at The University of Manchester who delivered care packages to staff during the COVID-19 Lockdown has made the shortlist for a prestigious health award.

Dr Haider Ali, was chosen alongside 6 others to attend the Daily Mail’s Health Hero Awards on the 9th November in London, Covid allowing.

Previous awards have been presented to doctors, nurses, care assistants or hospital porters by senior politicians, including Prime Minister Theresa May in 2018.

The awards, in association with eBay and NHS Charities Together, honour the men and women in the NHS who work tirelessly for their patients, going the extra mile.

Early on in the crisis he decided to start working Fridays for the GP practise for free.

But the doctor, who lives in Sale, felt moved to do more when he heard that Hotel Football in Stretford was putting up NHS workers for free.

After forking out a considerable sum of his own money, – at one point over half his monthly salary- he contacted the CEOs of different companies eventually started to receive give-aways.

At weekends and after work, he has been bagging up the gifts with his parents and his sister and then distributes the packages – even during the period of Ramadan when he was fasting.

More recently, he’s been putting together packs to supply the national squash centre, who opened a gym for health care staff during the time when gyms were closed.

He used a 3D printer to make around 2000 visors, distributing them to places where they are needed and is hoping to produce 3D printed stethoscopes for medics and nurses developing countries.

And he will also be working with the British Basketball League to host a charity event to raise funds for the NHS, delayed until audiences are allowed at indoor sport events

The Swedish doctor whose family originate from Basra in Iraq said: “It’s so thrilling to be shortlisted for this prestigious award. Quite amazing.

“When I started doing this work, I didn’t ever think it would be recognised by so many people. But I am just as grateful to all the people who have participated in this effort – from the companies and individuals who have come together to help our brilliant NHS workers .”

He added: “This work goes from strength to strength: So far we’ve spent £10,000 on packages sent to the front line workers.

“I’m hugely motivated to send some love to those people who are working hard to beat this awful pandemic. And I want to highlight the amazing things these people are doing.

“As a doctor I feel appreciated. Yes the pandemic has causes so much suffering – and we shall not forget that. But it’s brought a lot of positivity too and I hope that will be sustained long into the future.”