University recognised by THE for social responsibility work, with award dedicated to Paul Maccabee - JobScholarships Hub
Skip to content

University recognised by THE for social responsibility work, with award dedicated to Paul Maccabee 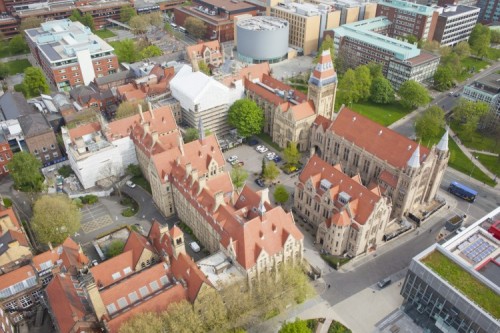 The University of Manchester’s work on social responsibility has been recognised through an Outstanding Contribution to the Local Community trophy at the sixteenth annual THE Awards. This completes a record hattrick of awards in this category over the past decade.

The THE Awards – widely referred to as the ‘Oscars of higher education’ – are the biggest celebration in the UK HE calendar, attracting hundreds of entries from individuals, teams and institutions from all corners of the country.

The award recognises the social and community impact created through the construction of the Manchester Engineering Campus Development (MECD) in partnership with Balfour Beatty.

Working with Greater Manchester Growth Company’s The Works, Manchester City Council and a range of local charities, £19.7 million of social value has been created for local communities – a record for any construction programmes in UK higher education. Successes included creating 182 jobs and apprenticeships for local people, some of whom were previously homeless or in the prison system; awarding £60,000 of cash grants to local community groups and charities; pro bono work with a local women’s refuge, an LGBT centre and food bank; and a maximum 45 out of 45 in the Considerate Constructors Scheme.

Dr Julian Skyrme, Director of Social Responsibility, said: “We are delighted to see our work with Balfour Beatty get this national recognition. Many groups and individuals made this project a success, but we’d all like to dedicate it to our former colleague Paul Maccabee, who played such a central role in advancing our University’s social responsibility agenda through construction projects. Paul cared deeply about local communities – particularly those who can be marginalised – and this success reflects the characteristic commitment, professionalism and compassion he applied in all of his work.”

Paul Maccabee was the University’s Deputy Head of Capital Projects who left a physical legacy of landscaping and buildings across Greater Manchester through his career at the University and Manchester City Council before this. He oversaw the University’s Brunswick Park green space, the First Light at Jodrell Bank project and supported a wide range of neighbouring charities with valuable pro bono support. Paul sadly passed away in September 2020.

Andrea Holt, Social Value Advisor at Balfour Beatty, said: “We are very proud to see the life-changing impact made through our work with The University of Manchester’s MECD project receive national recognition. This is what social value in construction looks like when clients and contractors share the same ambitious goals.”

Commenting on the awards, the judges said: “This is an outstanding example of an ambitious project that is clearly located in the present but looks to the future through the creation of jobs and apprenticeships, providing extensive support to local community groups while making exemplary use of social value metrics. It also involves not only the contractors but also staff and students within the university, thus delivering real engagement with the local community as well as long-term value.”