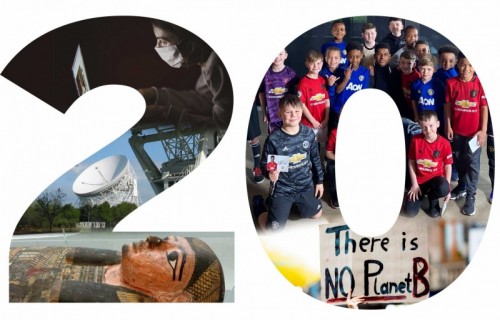 From explosive secrets in volcanoes to an exotic, never before seen particle at CERN it was safe to say July was another varied month at Manchester. But by far our biggest story of the month (if not the year) was the announcement that Marcus Rashford will receive an Honorary Degree for his remarkable campaign against child poverty and his sporting achievements. Coronavirus-related research carried on at pace through the summer with our scientists playing a leading role in ‘breakthrough’ COVID-19 drug research, discovering hearing deterioration was reported COVID-19 patients and being tall more than doubled the probability of having a coronavirus medical diagnosis. Our environmental researchers said the pandemic could be a historic moment for UK’s environmental future whilst our social scientists provided even more evidence that the North is being hit hardest.

Beyond the pandemic, our medical researchers continued to combat other serious illnesses. These included discovering ways to stop the spread of devastating childhood cancer and aggressive breast cancer whilst also becoming part of multimillion pound scheme that could make early diagnosis of liver disease a reality. Meanwhile, our linguists said all Northern regional accents are becoming more similar and there was also a creepy-crawly sense to some of other our sciences stories as researchers found spider silk could be a biodegradable alternative to traditional glue and that “unusual blue woodlice” may help develop new antiviral materials.

As the summer peaked in August, there was more world rankings success, the launch of the Innovation Factory, and the national £32m Productivity Institute found a home at the Alliance Manchester Business School. There was also more progress on racial equality as Manchester became part of UK’s first national pledge to reduce ethnic inequalities in mental health care.

However, there was also more sobering research into mental health which found young women are the most vulnerable to postpartum mental illness and bisexual people up to six times more likely to self-injure. More research showed that the pandemic had been tough on young people with one study saying it had been “an emotional rollercoaster for teenagers” whilst another found a “significant increase” in child-to-parent violence during lockdown. On more positive pandemic-related news, our COVID-19 history project was given £1million and the British people said they hoped to keep up their new sustainable habits discovered during lockdown. August also saw the launch of the UK Coronavirus Immunology Consortium and our experts helping to develop a strategy for children to get back to school in Manchester post-lockdown.

Away from the pandemic, our nuclear scientists joined forces with Sheffield to launch a £2.5m research project for the safe disposal of nuclear waste; our audiologists found that a third of over fifties with hearing loss could be undiagnosed; our palaeontologists found newly discovered rare dinosaur embryos show sauropods had rhino-like horns and three was the magic number for our academics at the Teaching Excellence Awards.

September: Is there anybody out there?

As the summer drew to a close were breakthroughs by our astronomers and astrophysicists in their search for intelligent life in the Milky Way and the century-long mystery of dying stars. But the biggest story of the month which garnered headlines around the world was the discovery of hints of life on Venus. Not to be left out our physicists down on earth helped to upgrade the Large Hadron Collider. On the COVID-19 front there was an innovative new PPE respirator design and a new tool to help students to learn effectively online during coronavirus, and collective group researchers and scientist at the University came together to say tackling inequality is key for the post-COVID economic recovery. In cancer, a new screening study could affect treatment for thousands in the UK and The Christie and University joined forces and committed to improving cancer outcomes in Kenya.

Also in September, university research into refugee experiences was part of major new exhibition and a virtual exhibition was also held to mark World Suicide Prevention day. There was a first look inside new £105m Henry Royce Institute which is based on our campus and, after months of lockdown, Manchester Museum and The Whitworth reopened to the public.

October was Black History Month and (alongside MMU) we marked the 75th anniversary of Manchester’s role in the African independence movement whilst Professor Dawn Edge was featured in an exhibition celebrating Britain's Black female professors. It is also the month we usually celebrate our Foundation Day and this year we produced a short film in tribute to our University community. Some members of said community were honoured in the delayed Queen's Birthday Honours list.

Despite the autumn chill and dark nights setting in, there was some excellent news for the Global Development Institute which secured £32million in funding for African Cities research. This wasn’t the only investment of the month with four of our academics among recipients of a £109 million ‘future leaders’ fund. We weren’t just on the receiving end of financial gifts either as more than £1 million was made available to our students, thanks to generous donations to the Emergency Hardship Appeal. But those figures pale in comparison to the £375bn new deal needed to ‘level up’ the UK outlined in a new report published by our social scientists.

It was another awarding winning month for the University as we won the “Outstanding Contribution to the Local Community trophy” at the annual THE Awards. The University dedicated the prize to the much-loved Paul Maccabee, our Deputy Head of Capital Projects, who sadly passed this year. As we entered the second national lockdown our coronavirus research seemed match the nation’s mood. It found the pandemic has had a massive impact on the North’s health and economy whilst face masks leave us feeling isolated and stressed and the death toll in care homes could be “hugely underestimated”. In other coronavirus research the lockdown also caused dramatic changes in water consumption.

But there was more good news as one of our researcher’s work lead to an activist being granted asylum after a 15 year wait and the Manchester 24-hour run made 'virtual' comeback. November also had a presidential feel about it at the University as another historic American election got under way. This saw Professor Gary Younge discussing race and US election in a public lecture whilst Professor David Olusoga interviewed Trump’s predecessor, Barack Obama on BBC One. Away from US politics, there was a “major step change” for the University as we carried on our  journey to zero-carbon and wider work on sustainability. For example, at a citywide-level we secured £1.5m for a project to revolutionise plastic waste in Manchester, whilst internationally we were one of an alliance of top universities that urged G20 leaders to prioritise net zero emissions. Our experts were also part of the launch of England’s Nature Recovery Network and carried global analysis of forest management.

December: Can your Christmas dinner help save the planet?

So, that almost brings us up to the present day and even though we are entering the festive season, we haven’t been winding down at all. In fact, in the first couple of weeks of December, our colleagues have won awards for research into LGBT+ sexual health services during COVID-19 and one of world’s top prizes in suicide prevention. Not to mention Manchester Museum has received a £1.3million Capital Kickstart grant from Government’s Culture Recovery Fund whilst half a million pound has been awarded to evaluate new NHS mental health and wellbeing services, ‘Resilience Hubs’

Our researchers haven’t stopped either and designed new face masks to overcome communication issues; produced information campaign to help older people keep well this winter; written a new report that reveals victims of crime presently lack an independent enforcer of victims’ rights; found out why the heart slows down at night; used 3D scanning technology to bring Manchester’s cultural sites to you and asked the age-old festive question can your Christmas dinner help save the planet.

For more on the University's role in the Greater Manchester response to coronavrius read our reflections on the first six months of the COVID-19 pandemic.

Thanks to everyone in our community who has contributed to this impressive list of achievements and all the colleagues working behind the scenes to support students and keep our University functioning during the pandemic.

Many of those colleagues will also be working over Christmas, including supporting our students. There’s lots of support on offer for those staying with us over Christmas and we’ve published it on our website.